Use of Social Media by consumer businesses

I was on holiday in Amsterdam last week.  Had a great family holiday in a beautiful city – though it was a bit cold!  Whilst there, it was interesting to see how businesses were reaching out to me as a consumer, through the use of Social Media.

Many of the shops had QR codes in their windows to take me to their online shop when they were closed.  This is easy to do – the only cost being the sticker for the window.  In the example given in the image – the QR code takes the visitor to a different website than the normal experience – other QR codes I saw took the visitor to the standard shop.  What a great way of capturing interest from people passing. 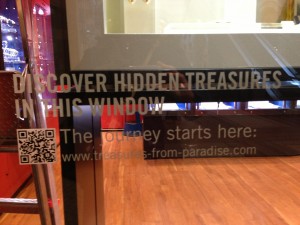 Another interesting use of QR Codes was in the Amsterdam museum.  The QR code was on the free guidebook given out at the entrance.  The QR code was used to start some of the interactive displays in the museum.  At one of the exhibits, visitors were encouraged to take a photo of themselves standing behind some armour.  The photos were automatically displayed on the Amsterdam museum flickr stream.  It felt like they could have made more use of the QR code to capture visitor information, but some interesting ideas.

Not surprisingly, Facebook was used in a number of ways.  The Amsterdam museum had a exhibit about Johan Cruijff.  By logging into Facebook, you could take a photo of yourself with the great footballer!  The Heineken Experience had a number of interactive displays, quizzes, etc which could be accessed through Facebook – thereby telling all your friends that you were enjoying the attraction.

One of the best uses of Facebook that I saw was in a restaurant.  Rather than the usual dodgy ads in the toilets, there was an invitation to enter a competition to win a meal for 2 by liking their Facebook page.  This was an ideal time to talk to a captive audience! They even included their WiFi code with password.

Have you seen any interesting examples of businesses reaching how to you as a consumer?  I would love to hear about them.