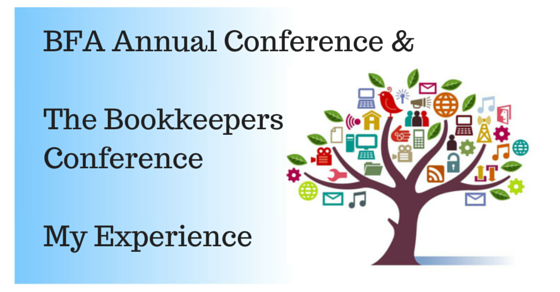 As you may know, last week, I was speaking at both The Bookkeepers Conference and the British Franchise Association Conference.  I think it is an interesting exercise to compare the two conferences and pick out lessons I learnt from each.

The Venue and Facilities

As it happens, both conferences were in Birmingham.

The Bookkeepers Conference, with about 150 delegates, was held at St Johns Hotel, Solihull.  A great venue, easy to find and with plenty of parking; it had a large main theatre and several small theatres. Endless tea and coffee during the day was definitely a bonus and a buffet lunch was a mixture of sandwiches and buffet items.

The British Franchise Association Annual Conference, with about 250 delegates, was held at the International Conference Centre in the centre of Birmingham.  I took the train and walked to the venue – I didn’t fancy parking in the centre of town.  Once I had found the right part of the Conference Centre, the facilities were great – though personally I found tea and coffee in short supply throughout the day.  The main auditorium was amazing – comfortable seats and a massive screen with good lighting.

Thanks must go to the AV guys at both venues who did a great job sorting out slides and organising microphones for the speakers.

One of the great things about attending these conferences as a speaker was to be able to listen to the other speakers.  I only attended the British Franchise Conference for the first day, but all the speakers were interesting and were well received by the audience.  I particularly enjoyed the talk by Karl Sandall and his team about the franchise assisted management buyout of Tax Assist.

The bookkeepers conference speakers were equally interesting.  The lessons about using menu pricing from Kris McCulloch of Ayrshire accountancy and bkpr.co.uk were applicable to many sectors and whoever knew VAT could be as much fun as  Nicola Cadwallader FCCA AIIT CTA, and Fred Cowgill made it.

Lessons I learnt from my speaking slots

So how did my speaking slot go in each of the talks?  In both cases, the talks seemed to be well received – lots of positive Twitter comments anyway!  At the Bookkeepers Conference, I spoke for 30 minutes about creating a social media strategy and at the British Franchise Association, I spoke for 60 minutes about making use of your LinkedIn profile.

What would I do differently?

Overall I enjoyed attending and speaking at the conferences – and I would like to do more during the coming year, so do let me know if you hear of any other opportunities.

Please share your experiences of the conferences in the comments below.