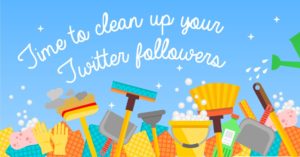 When you created your Twitter profile, you may have had the primary aim of growing your following. You may have picked up followers quickly without really considering how desirable those followers actually are. It is understandable that you wanted to increase your reach but many of the followers that you have gained may be irrelevant, inactive or spambot accounts.

Why would you want to remove followers?

Having fake followers – spambot accounts and those set up just for the purposes of following others – may seem harmless but following you may simply be the first step these accounts are taking in order to reach your genuine followers and spam them. Consider how that would reflect on your brand … Person A follows you and they are then inundated with spammy followers.

It is also a common tactic that hackers use. They will target a profile and follow it with lots of spam accounts until it appears to be an important and popular account. When it has gained enough traction and attracts other genuine “important” followers they will then attempt to hack the account and use it to broadcast their spam to your genuine followers – much of this is malicious and contains links to web sites which spread viruses and malware.

Twitter, in particular, is a fast moving service which contains a lot of noise. Over the years, you may have followed accounts that are generating irrelevant or spammy content. This prevents you from seeing the information and discussions that you want to see. Now is the perfect time to unfollow inactive accounts and spambots that you may have unwittingly followed back.

You can also mute those noisy accounts that are stopping you seeing the information that you want to. This hides their tweets but you can remain as their follower.

You should also organise your followers into lists. You can do this via Twitter directly but when working with lists we would recommend a social media management tool like Hootsuite. You can sign up for a free trial of the Pro version or you could sign up for a free account here.

You can use Hootsuite to create lists to organise your followers, you can then apply filters to the lists to see only the followers that meet the criteria that you set. You might want to consider sorting your followers into lists by geographic area, by using a search to see what they talk about or into a list based on how many followers they have. All these are possible with Hootsuite and it can make your use of Twitter much more efficient.

If you want to learn how to use Hootsuite to make the best of your Twitter, consider our City and Guilds Award in Social Networking Management for Business. This is an accredited qualification that will teach you how to manage Twitter effectively.

Tools to help you clean up your Twitter Followers

There are many tools to help you with a clean up of your Twitter followers / follows but one of our favourites (because it has many useful features) is Tweepi.com With Tweepi you can perform the following cleanups easily:

You Follow – this feature allows you to see a list of your followers with information about each. You can see how active they are and their follows / follower ratio.

Unfollow Eggs – unfollow all those accounts that have not bothered to add a profile pic. These are often spambot accounts. This tool also shows the follower ratio for each account so you can see which ones are spambot accounts that follow lots of people without attracting followers of their own.

Force Unfollow Eggs – this feature allows you to force all those accounts that have not bothered to add a profile pic to unfollow you. These are often spambot accounts.

Smart Unfollow – this allows you to filter those that you follow according to a range of criteria including how active they are when you followed them if they follow you and more. Used carefully this tool can help you to isolate those accounts that you should unfollow.

For example, if you have a “Silver Membership” on Tweepi you could perform the following steps to remove annoying spammers that are trying to promote the purchase of Twitter followers – you know the ones, we all get them.

You might also want to import the blacklists that other Twitter followers have shared. These are lists of spam accounts that others have blocked which they then share with you. You can read more about this on the Twitter blog here.

Tweepi is not the only tool and there are a number of free tools that perform useful Twitter cleanup functions:

https://who.unfollowed.me/ – there is a free plan which gives access to useful features including the ability to see accounts that have previously followed you but now don’t

In a similar way to Twitter, you should organise your Facebook friends into lists. You can add people to the lists manually or you could use a Smart List to have people automatically added to it. These could be lists that include friends within a certain radius of your location or those that went to the same school as you. You can read more about this feature in this article.