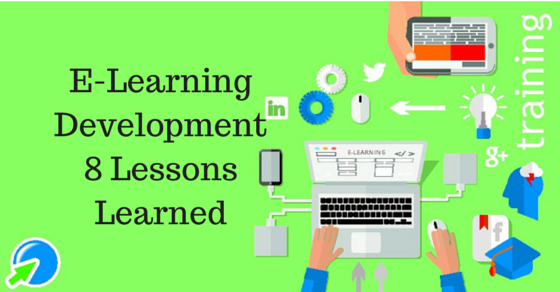 Our first learners, Lin MacDonald and Karen Chapple joined in January 2011.  We originally used the Moodle Learning Management System both as an e-portfolio system and as a method of learning.  We took the content from the workshops that I was delivering to businesses and created them as text objects within the Moodle. In retrospect this was quite a primitive approach, but a number of learners used the objects, along with individual Skype support and feedback to pass the qualification and go on to create successful businesses managing social media content for others.

During 2012, we felt that we needed to update the resources and this coincided with an approach by Pitman Training Group who wanted to use our learning resources for their learners.

Di and I spent the end of 2012 and beginning of 2013, rewriting all the courses using Articulate Storyline to produce step by step, interactive courses to replace our Moodle learning objects – not an easy task I have to say and a task I definitely underestimated in terms of time!

The new look courses were launched in April 2013 and have been updated in June and December ever since.  The total number of courses has grown as new social media channels have been popular and additional courses were required to support additional qualifications. For example, the latest course is Digital Campaigns, available to learners on our Diploma in Social Media for Business qualification.

So what have we learned in the last couple of years?

1. Plan the object and content in Word or PowerPoint before putting it into the tool.
Sounds obvious, but I have a tendency to want to write the content in a number of layers.  Di then makes it interactive and far more visual!  It is easier for her to do this if the majority of the content is initially written outside the tool.

2. Consider what devices learners are using to access the learning
We redesigned our objects after the first year to allow them to be accessed on a range of mobile tablets.  We had to rethink how we were displaying videos, scroll down bars, and some of the interaction.  We also found differences between Android and iPad so do test on both – a good excuse to purchase more tech!

3. Use plenty of scenarios
We have found that scenarios work really well to illustrate a point and make the learning more business appropriate.  We have a number of characters who appear in all our courses, but the scenarios still work if the courses are done separately,

4. Get somebody else to proofread and check links and then do it again
We check every word and every link of our courses but have learned to now ask somebody else to check again. It is amazing how links that worked for me, just don’t work when somebody else clicks!

5. Create short videos to show technical features – and make sure you use the zoom!
We have learned that it is better to have 2 short videos rather than 1 long one. Not only as it is easier for the viewer, but also because it is easier to update when things change! Zooming is easy to forget when you are creating the video, but makes it much easier for the viewer to see what you are doing.

6. Make the learning personal
We have had great feedback on the e-learning courses partially because we use our own voices throughout the learning alongside photos of us. Learners feel they are being personally taught by me and Di. In fact, I’ve had learners say they feel they know me after they have completed the course.  We feel this makes the learning easier to digest and more engaging and relevant.

7. Use a combination of delivery methods
We try to combine audio, text, video, images, external links, scenarios and exercises in every course as well as interactive buttons, drag and drop functionality or text entry fields. Each screen (where possible) looks different to provide interest and keep the learner engaged.

8. Treat learners as adults and allow them to control their learning
I don’t know about you, but I hate being forced to take a particular path (in anything in life :-)).  I’ve seen many e-learning courses which force you to go from one screen to the next and even read the text on the screen for you.  We believe that our learners are adults and are quite capable of following direction and reading.  Learners can jump around the menu and audio is available on some screens – but to offer additional input, not to do the reading for the learner.  We know this means that it isn’t as accessible as it could be – and a job for the future may be to create fully accessible versions of the learning courses.

We are proud of our courses and I know our learners like them.  Do share your experience of creating or using e-learning?