Writing a book – is it worth the effort?

It is just over two years now since I first published ‘Social Media Made Simple‘.  I always encourage my clients to reflect on how successful their activities have been – and I thought it would be worth sharing my thoughts on the value of writing a book. 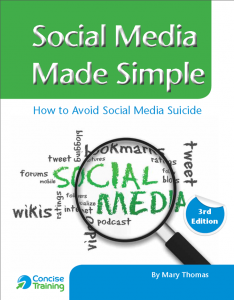 Of course, it takes time and effort to write a book – not to mention money to have it edited and designed.  I can’t even suggest the amount of time it took to actually write ‘Social Media Made Simple’ – though I remember I spent many hours writing it while waiting for my children to take part in various sports training sessions and competitions!  It was information that I knew about though – the information in the book was based on workshops that I delivered – which did make it easier I think.

I employed an editor to help me tidy up and proof read my writing and had the book professionally designed and laid out.  At the time, I made the decision to write a ‘work book’ and decided not to go down the ‘e-book’ route.  I have to admit that there have been times over the last couple of years when I have wondered whether that was the right decision, but I think it was – having an actual book is a better marketing tool since my branding is all over it.  The design and decision to use a spiral bound has made it easier to read and people do like being able to complete the exercises. Do think about using an e-book format for your book though – if it is mainly words rather than images / tables / charts, it might be worth creating an e-book version as it is cheaper to produce and easier to promote.

I was fortunate to be working with City & Guilds at the time I was about to publish my book.  I was part of a team working on the City and Guilds Social Media for Business qualification and one of the units I wrote – Principles of Social Media in Business was remarkably similar to the contents of my book :-).  City & Guilds were kind enough to endorse my book as one of the resources for the qualification!

The nature of social media being an ever changing environment meant that if I didn’t want the book to be out of date, I needed to update it regularly – we are now in the 3rd edition and I try to update it every time I order another print run.

So 2 years on – has it been successful? Well, I was never going to make my fortune out of ‘Social Media Made Simple’, but I’ve now sold over 500 copies.  That doesn’t sound many but I was told early on that selling 100 copies / year of a self published book was considered to be good and I recently read that the average self published book sells 250 copies, so I’m quite pleased with my 500 – particularly as I haven’t put a marketing campaign around it, but have relied on word of mouth sales.

It has been a good marketing tool and several people who have bought the book have now become clients, either buying my E-Learning courses or other social media services.  I’ve had good feedback that it is easy to read and a good introduction to social media. It is also good for my credibility – I like being a published author!

So, should you consider writing a book?  I would say that everybody has an area of expertise that you can share with others and writing a book is a good way of sharing that expertise.  However do consider it to be a marketing exercise and put a part of your marketing budget towards the cost of writing and printing it. Personally, I don’t give the book out for free though – I think people value something if they have to pay for it – and it costs quite a bit to get the books printed, partially due to the spiral bind that I have used.

If you don’t like writing, or you are not very good at writing, make a series of audio recordings of parts of your book and employ an editor to help you structure it and write it based on your recording. If you write regular blog posts, consider writing your book based on your blog posts.

Having a book does differentiate you from others.  Imagine I was choosing between two accountants – if, for a small amount of money, I could read the book that one of them had read – assuming that I liked the style and found it useful, which accountant am I most likely to choose?

What are your thoughts? Have you thought about writing a book?