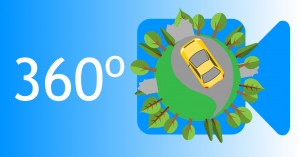 If you have not come across a 360-degree video yet, you may be wondering what is so great about them. They are the next stage in the evolution of the 360-degree panorama, the difference being a 360 degree panorama such as those seen in virtual tours is a series of static images stitched together and distorted to fit on the inside face of a virtual sphere or cube and a 360 degree video is a moving scene within which you can change your viewing perspective.

The best way to get your head around this is to look at an example:

To view this, you will need the latest version of a compatible browser (Google Chrome seems to be the best as far as we can tell) and plenty of spare bandwidth – the data-heavy nature of these videos being their biggest drawback at the moment.

To explain how these are created we can look back a few years to the introduction of the 360-degree panorama.

Today’s digital cameras nearly all have a setting for shooting panoramas, you push the button and move the camera slowly from one side to the other panning across the scenery. The camera takes a series of images and stitches them together to form a single image.

Before these cameras were developed you had to shoot a series of images and put them through a stitching software such as the free to try Panaview Image Assembler. Whether the camera did the stitching or you did it using software like Panaview, you would end up with a single large panoramic image:

With the addition of a shot taken straight up and one taken straight down (the poles) you could then do the clever bit which was using software to “bend” this image so that it effectively lined the inside of a virtual sphere – Image Assembler can’t do this alone but PTGUI can.

Instead of stitching lots of images taken from the same lens,

commercial cameras were developed that had lens arrays i.e. a series of lenses facing in different directions so that all viewpoints could be captured in one go. This is the sort of technology that enabled Google Street View.

The next stage in the evolution was to use multi-array cameras to shoot in all directions from a moving point and this is how a 360-degree video is created. There is a variety of camera and software options that are within the reach of most small businesses (read more about your options here) and you can share 360-degree videos via YouTube and now Facebook. In fact, you have been able to share this format on YouTube since March 2015 (Facebook since September 2015) and Facebook started testing 360-degree video adverts in November 2015.

The fact that Facebook has followed YouTube so closely in making this format available to its users shows just how they are seeking to take over as the video sharing platform of choice. They want their network to be the first place that you look for videos and as business owners, we should take this seriously. There is a small window in which the novelty factor of this format means that a 360-degree video will attract a lot of views but it is set to become the norm and to take advantage of this format for marketing purposes you will need to act quickly.

What to use 360-degree videos for:

If you are not quite ready to shoot in 360 but have an idea for your next marketing video, ask yourself whether uploading to YouTube is the right thing to do. You might get more views by sharing it on Facebook.